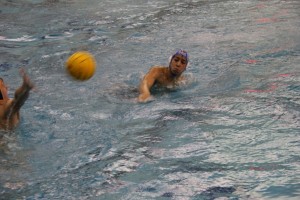 In its short school history, a championship tradition has been created and nurtured at Skyline High School. And last weekend, a State championship team for Skyline Water Polo took home the #1 title. It was well deserved.

Both Skyline supporters and opponents speculated all year that we may have a good chance at the state title. And after a 31-5 regular season record, a district championship and a runner-up Regional tournament run, expectations were high. But entering the state tournament, Rockford was ranked as the number one team, and Skyline was seeded #2 in the East region. Skyline had its work cut out for them.

“I could not have asked more from these boys,” said Coach Rebecca Godek. ”We had our ups and downs and injuries, but they trusted in themselves and stuck to the game plan all weekend long and it all paid off. Every win this weekend was special in a different way – Grand Haven had taken us down earlier in the season, Rockford is the powerhouse of the state, and Hudsonville knocked us out of the state tournament first round last year.”

Looking back, Skyline showed outstanding teamwork and precision this season. They brought their best effort to the tournament and with a home crowd giving their support, they succeeded.

Quarter Final: With an impressive 13-6 win over Grand Haven on Friday, six Skyline Eagles contributed goals, including Ryan Vander Meulen with five goals, Matteo Procoppe adding three and James Rozsypal contributing two of his own. Henry Case, Wilson Noll and Marcus Kintz each scored one goal for Skyline. It was a total team effort.

Semi Final: Skyline faced off against Rockford on Saturday morning in the semi-final matchup. Earlier in the season, Skyline’s victory over Rockford provided some team momentum. In the first periods, Duncan Kennedy’s superior goalkeeping combined with the defensive strengths of senior captains Marcus Kintz and James Rozsypal led Skyline to lead 5-0 in the first quarter. Rockford’s Sam Sikkema singlehandedly brought them back into the game to a 7-7 tie in the second half. Skyline had adjustments to make.

At 38 seconds on the game clock, Vander Meulen scored the go-ahead goal. With 22 seconds remaining, Rockford seized a 6 on 5 power opportunity, and James Rozsypal blocked a shot and controlled the ball until the final seconds when a turnover gave Rockford one final chance. Goalie Duncan Kennedy blocked the final shot with less than a second left to preserve the win. With the final score of 8-7 over Rockford, Skyline advanced putting Rockford against Ann Arbor Pioneer for a 3rd place matchup.

Championship Game: In the final game against Hudsonville, Skyline started strong taking the first quarter with a 4-0 lead. Ryan Vander Meulen took all four sprints early in the game, giving Skyline the first chance to score each time. In the second quarter, Hudsonville fought back to tie the score and then Skyline and Hudsonville traded goals ending the half at 8-8. Again, Skyline had adjustments to make.

In the 3rd period, Hudsonville was held scoreless as Skyline added 3 goals. With kick-out trouble for Skyline starters Matteo Procoppe and Wilson Noll, Skyline tightened up its defensive efforts, and after 3 minutes of play in the 4th quarter, the score remained 11 to 8, Skyline lead.

With the shot clock running out, Vander Meulen scored the final goal for Skyline. Goalkeeper Kennedy defended each attempt at their goal for the remainder of the game.

“I have never seen this group so focused and motivated,” said Godek. “Every player fulfilled their role on this team, whether they were in the water or not, and that is how we got to where we are now. We had 4 players earn first team All-State honors – Matteo Procoppe (MVP), James Rozsypal, Ryan Vander Meulen, and goalie Duncan Kennedy. I couldn’t be happier or more proud of this group!”

At the final buzzer, the natatorium erupted in cheer and Skyline Water Polo was awarded what they well deserved – a State Champion title.