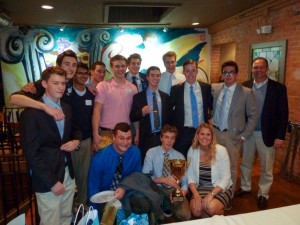 The themes of the evening included dedication, mental endurance, maturity and hard work. Coaches Rebecca Godek and Matt Graziano thanked the players and acknowledged each one for their contribution this season.

“Our water polo family is tight,” said senior co-captain and team-voted Offensive MVP James Rozsypal. “We have spent hundreds of hours together in the pool beginning back in August, and when the last buzzer sounded at the final game, we knew we were the champions.”

“We had our challenges this season,” said Rozsypal. “Our starting goalie was out due to injury, and our Rookie of the Year Mason Hickman, a freshman, stepped into his place. Another starter had a broken nose that also put him on the sideline for a couple weeks. But through it all, we didn’t give up. We wanted to win the state title.”

Their road to the state tournament speaks for itself, and their “get it done” attitude persevered.

Congratulations and thank you to our Skyline Water Polo team! Go Eagles!