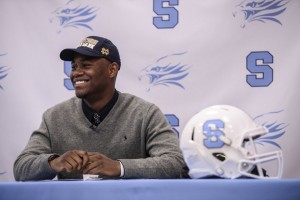 Daelin Hayes will be a member of the Fighting Irish class of 2016 .

On Thursday, the recently graduated Ann Arbor Skyline linebacker announced his decision to be a mid-term enrollee at Notre Dame. Hayes is a consensus four-star recruit, ranked top-three in the state and top-10 among linebackers in the nation.