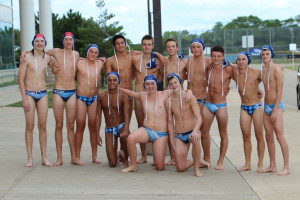 Ann Arbor Skyline’ Eagles took to their home pool October 6-7 as the water polo team hosted an invitational tournament for both local and  top teams from other areas and states. The result was some exceptional games for the home team and visitors as they crammed a marathon 18 games into two days.

Key results for the Eagles included one win and more than three dozen goals – including an amazing 20 from stellar senior co-captain Matteo Procoppe. During all four games, the Eagles showed their stamina and developing sophistication on running plays. While they lost three games, each was hard-fought and proved to the team and their fans that this is a team up for challenges and ready to play competitively against any contender.

The weekend started with a win 13-9 win against St. Charles from Columbus, Ohio. Matteo answered the first goal of the game, scored by St. Charles, at 3:23 in the first period – getting the team onto the scoreboard 10 seconds later.

Other goals came from Ethan Procoppe, Spencer Jyawook (on an exclusion), Wilson Noll, Shane Mac Neil (2) and Alex Eisman, who popped the ball into the net after the St. Charles goalie swam out of the net. Matteo finished the game with seven goals, including one scored after Wilson stole the ball and passed it ahead. Defenders Josh Smith, Nick Pachera, Patrick Dempsey and Liam Keating all kept the team in its winning position.

The second game ended up a loss of 10-7 against Chelsea Pier from Connecticut. Goalie Mason Hickman blocked hard shots like a pro, keeping Chelsea Pier to a single goal in the first quarter while Matteo and Wilson scored to give Skyline the lead. Four more goals came from Matteo – one on a 5-meter penalty – and Keegan Gardner also scored on an exclusion.

The Eagles battled arch-rival Rockford in the third game, which started on Saturday afternoon. The Rams, ranked first in the state ahead of the Eagles, brought a tough offense that the Eagles met head-on for most of the game. Skyline took an early lead in the battle, with five goals: 2 from Matteo, 1 from Ethan and 2 from Wilson, one of which was a sharp back-hander. Mason made a crowd-pleasing save on a 5-meter shot, too, keeping the game taut. The Eagles suffered from a scoreless second quarter, followed by a four-goal third: Ethan, Matteo, and two from Wilson, one of which went in after a set-up pass from Keegan. Matteo scored the solo Eagles goal in the fourth.

The final game for the Eagles also closed the tournament weekend, with the Eagles pitted against Greenwich, Connecticut. This nail-biter kept fans on the edges of their seats through all four quarters, until the 10-9 loss. This game included some notable goalie pressure, including from Matteo, which allowed Ethan to score in the first. Another goal came from Keegan, after what looked like a choreographed move to get him the ball – it started with a long pass from Wilson to Matteo, who made the pass. Mason made more solid saves in the second, including one from barely 3 feet away from the net. Goals came from Ethan, Wilson and Matteo. Matteo then scored in the third, lobbing the ball into a deep corner of the net as the goalie could only watch it fly past him. Highlights from the fourth quarter included goals from Ethan, Matteo (2) and a dramatic save by Mason from 2 feet.

Next up for the Eagles will be Senior Night on Wednesday, September 11. All five seniors will be honored: Matteo, Wilson, Alex, Josh and Liam. The games will be at home against Dexter, with Varsity starting at 6 p.m. and Junior Varsity playing after. Senior Night ceremonies start at 5:45 p.m.