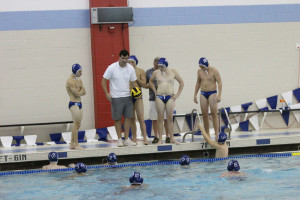 The Skyline Eagles start their run to the 2017 high school boys water polo championships on Saturday, October 21, with their first district meet.
The boys finished first in league play, giving them a break on Friday night as the Eastern District of Michigan culling began. The Eagles are hosting the series at Skyline.
Their first game is at 9 am Saturday against Ann Arbor Pioneer, which beat Saline on Friday to advance to the semi-final round.
Their second game will be at 2 p.m. or 3:15 p.m. Saturday, depending on the outcome of the first game. That final game is the championship game for district, with the earlier matchup set as the consolation final.
The team automatically advances to Regional play, given their bye on Friday night. Those games will be battles among the best teams in the eastern half of Michigan. They take place October 27-28 at East Lansing High School.
The playoffs follow a tough water polo weekend for the boys in Rockford, where they played in the ROCK-tober tournament ahead of their Homecoming.
The Eagles, still ranked 2nd in the state, played number one Rockford, number four Hudsonville and two out-of-state teams. The boys lost to Rockford, but pulled out three wins – including a tense matchup against St. Xavier of Ohio.