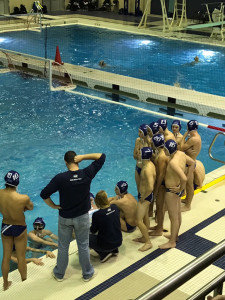 Ann Arbor Skyline’s boys water polo team started regional playoffs on Friday, October 27, with a high-scoring game against Birmingham Groves, winning both the contest and a place in the state finals.
The final score was 19-11 – with 11 of the Eagles’ goals coming from senior standout Matteo Procoppe.
Parents, siblings and fans in the stands at East Lansing High School had plenty to cheer for during the entire game, as the full team got plenty of playing time before the win.
The first quarter started with a 5-meter penalty shot by Matteo that danced into the net. Senior powerhouse Wilson Noll followed that with three goals, including taking one pass in front of the net from freshman Ethan Procoppe and pushing into in for the score.
That quarter ended at a 4-4 tie, and the Eagles came back from the break ready to dominate.
Matteo scored five goals, including one on a pass from junior starter Keegan Gardner and another on a 5-meter shot. Ethan added one, leaving the game at 10-5 at the half.
Five more goals followed in the 3rd, including one by Matteo who walked it right up to the goal after faking the goalie out of the net. Keegan nailed one from about 7 meters down the middle, with senior Josh Smith closing the scoring in the quarter.
The first goal in the fourth quarter came from sophomore Derek Mrachko, who took a mid-pool pass from Keegan and took aim at the net. Matteo scored two more in the fourth, one on a 6-on-5 opportunity.
Senior co-captain Liam Keating put the final goal onto the board.
This wasn’t just a game of goals. Mason Hickman made a number of key saves, including one fourth-quarter grab of a pass that broke up a threatening play before he handed over the net to sophomore Nicky Boucher.
Strong defensive moves kept a lid on the Groves scoring chances, including some hard pressing from senior Alex Eisman and junior Patrick Dempsey. And the Eagles kept the shots flying,with junior Shane MacNeil and sophomore Spencer Jyawook firing off some close calls.
Skyline will play two games on Saturday as the east side of the state determines its regional champions – and all games feed into the state meet seeding, so each matchup is critical for the season, said Head Coach Reb Godek.
The first game of the second round will be against Holt/East Lansing on Saturday, October 28, at 10:15 a.m. The second game will be at 2 p.m. or 3:15 p.m., depending on the morning outcome.

No Events This Week

Events are added by athletic staff.
View All Events