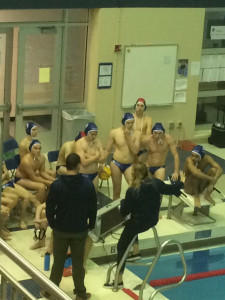 Goals, turnovers and smart playing by Skyline’s Eagles defined their second win of the high school boys water polo regional tournament games.
The boys beat the Holt-East Lansing team at their home high school on Saturday morning. The 20-5 win sends the Eagles into the regional finals against rival Okemos.
First period goals came from Wilson Noll (2), Ethan Procoppe, Matteo Procoppe and Shane MacNeil, who scored during a 6-on-5 penalty.
As the team built their lead, they used turnovers to their advantage in the last three quarters. Keegan Gardner took one turnover, passing the ball to Matteo for another goal. Matteo scored on a 5-meter shot, following another goal from Wilson and one from Keegan.
The third quarter started with a goal from Keegan with 1 second left on the shot clock. More goals came from Ethan and Matteo before Wilson stole the ball and raced it to the net. Goalie Mason Hickman blocked a strong shot as the opposition tried to run the next play, then Matteo scored again. The Eagles showed their ability to set up a play with the next goal, when Matteo passed to Keegan in front of the goal; Keegan tipped the ball to Wilson, who knocked it it. The quarter ended at 16-5 after Wilson made another steal, taking it in for the goal.
Sophomore goalie Nicky Boucher relieved Mason for the 4th after the varsity goalie distinguished himself on several well-aimed shots. The team won the ball out of the sprint, thanks to the teamup of Ben Keith and Derek Mrachko, both of whom moved up from JV for post-season play.
During the 4th, Matteo scored two more goals as defenders Ethan Procoppe, Nick Pachera and Ben pressed hard to hold onto the lead. The last two goals came from Derek and Ben, who scored after a thrilling breakaway.
The last game of regional weekend play starts at 3:15 p.m. Saturday, October 28, at East Lansing High School. Skyline plays Okemos for the regional title and top seed of Eastern Division as the boys head into states Nov. 10-11 at Ann Arbor Huron.