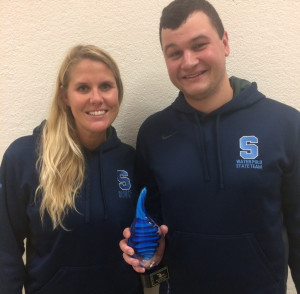 Skyline’s Eagles took home the 2nd place trophy for Michigan’s East Region after an overtime battle against Okemos to end a weekend of championship water polo at East Lansing High School.
The team lost the game 12-9 after giving up three goals in the two overtime periods, capping a tough and well-played game full of turnovers, exclusions and breath-taking moments for everyone in the stands.
“It was an awesome game, well-played, well -fought,” said Skyline Head Coach Reb Godek.
She added: “It was maybe our most physical game of the season.”
The game started with a single Skyline goal in the first quarter when Keegan Gardner scored during an Okemos penalty. They hit the break down 3-1.
Two goals came in the second quarter, one each by Wilson Noll and Matteo Procoppe. That countered just one goal by Okemos, leaving the Eagles behind by one goal, 4-3, as they headed into the half. But they also went into the break with a wave of momentum after successfully killing multiple 6-on-5 opportunities for Okemos. A one point, Okemos controlled the ball and the Eagles were playing down a player, yet Matteo stole the ball and spoiled their attempt to score.
The third quarter started with adrenaline flowing in the water and in the stands, as everyone in East Lansing’s natatorium was riveted on play. The Eagle’s first goal came as Matteo and Keegan were near the Okemos net as the goalie tried to clear the ball. Matteo got control of it – and the goalie was out of the net. He popped the ball to Keegan, who knew what to do with an empty net.
Matteo got the next goal and the team was up for a while. They ended the quarter at 6-6, a score that only reflects a fraction of the pressure put on Eagles goalie Mason Hickman, who blocked shot after shot. Eagles defenders Alex Eisman, Shane Wilson, Josh Smith and Patrick Dempsey added to the turnover count and pressing, keeping the team’s momentum and hopes for a win alive.
By the end of the fourth quarter, the Eagles were down 8-6, Ethan Procoppe had been ejected and multiple Skyline players were playing with 2 exclusions and the threat of heading to the bench with one more. But they rallied and each player stepped up for crisp focus as they saw the clock ticking and the need to act – fast. Matteo threw one into the net at 1:39, raising hopes for a tie. And with just seconds to go, Keegan found himself close to the net with the ball, throwing in it to even the score. One last chance to score came with 3 seconds, and Matteo shot a bullet – but an Okemos player deflected it before it could reach the net.
The team headed into two 3-minute overtimes, knowing their hopes for a Regional Championship win would be decided in 6 minutes. After a couple of tough penalties, the Eagles couldn’t battle onto the scoreboard.
“The difference-maker was our ejections,” Godek said. “We drew five and we had 16 ejections against us.
“That’s probably a record,” she said. “That’s not a good number.”
Godek said she was proud of the team’s fight, noting that Okemos had size over the Eagles – but Skyline’s effort closed the gap.
“You saw feet coming out of the water, you saw elbows to the head,” Godek said. “… It was extremely physical.
“We fought as hard as we could.”
Godek and JV Coach Matt Graziano took home the 2nd place East Regional Trophy on behalf of the team.
Now Skyline advances to the state tournament Nov. 10-11 at Ann Arbor Huron High School.