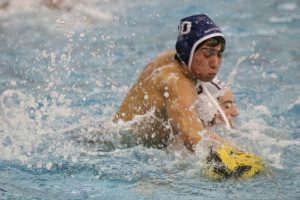 Skyline’s Eagles jump into the pool on Friday, November 10, for their first game of three to determine Michigan’s state champs in boys water polo.
The game will start at 7:45 p.m. at Ann Arbor Huron, 2727 Fuller Road. The pool entrance is at the far west side of the building.
The game will be against Grand Haven. The next two games will be on Saturday, with the times and opponents determined by the outcome of the Friday night lineups.
The Eagles come into the game as runner-up Regional Champs, following a hard-fought OT loss to Okemos in the last playoff round. They’re also the last team from Washtenaw County to advance to state-level play.
The lineup includes Matteo Procoppe, the East Region MVP. He and Wilson Noll were named first-team All-Region players. Keegan Gardner and goalie Mason Hickman earned honorable mentions on that list.
Coach Reb Godek, who lead the team to a state championship in 2015, was named East Region Coach of the Year.
The team finished 8th in 2016, after standout goalie Duncan Kennedy was injured in regionals.
Photo Gallery: See Boys Water Polo in Action