The men’s hockey team takes on St. Clair Shores Unified at 6:00 on Wednesday 11/14 at the Arctic Coliseum in Chelsea as they embark on the 2018-19 season.  With some new talent combined with most of last year’s core squad, this team looks to be the best that Skyline has been able to put on the ice since its inception.  This year the Eagles have moved from the SEC White division to the tougher SEC Red division, which features Saline and crosstown rival Pioneer.

The Eagle icers are lead by senior captain Luke Lippert, and assistant captains Noah Bradburn, Henry Hescheles and Ryan Schmunk.  Goalies Brendan Cobb and Tommy Letke will be battling for the number one position as both look very strong in net for probably the best tandem in the conference.  Coach Jake Stripp, in his fourth year at the helm, has been able to assemble a very dangerous team that could make a deep run into the playoffs in the spring.

Upcoming games are as follows: 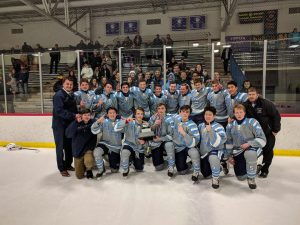