Hosting Monroe High school on Tuesday night the Skyline Eagles continued their winning ways.  In addition to teachers appreciation night the Eagles swept the Trojans in three straight sets. In the first set Skyline jumped out to a 6-1 lead behind the serves of Harper Murray and the combination of assists from Stacie Warner to Kendall and Harper Murray.  Skyline continued to dominate the first set as they increased their lead to 14-6 behind several errant passes by Monroe.  Monroe scored two straight points to close the lead to 14-8.  Skyline would score two more points highlighted by a tip over the net from Warner and kill from Harper Murray.  Skyline made several errors in passing before Monroe scored on a kill and closing the lead to 18-15.  Skyline would answer by scoring three consecutive points following  Monroe serving out of bounds, an ace by Mckenna Pfeffer, and a kill from Kendall Murray.  Monroe sensing the game getting away from them called a timeout.  The Trojans would only score two more points and the first set was won 25-17 after an ace from Harper Murray.
In set two the Trojans and Eagles were tied 2-2 until Warner served an ace and Skyline  never relinquished the lead again.  The Eagles maintained a one point lead until Sasha Akuezue scored on a block to open the lead for Skyline to 6-4.  Skyline would score four consecutive points behind the serves of McKenna Pfeffer opening the lead to 10—4.  The Trojans called timeout with the score 12-5, but Megan Brummet answered on ace to put the lead to 13-5.  The Eagles continued to push ahead to 18-7 after Brummet saved a ball that was more than ten feet from falling out of bounds. The Eagles would extend their lead to 22-13 behind the assist of Warner to Akuzue, Kendall Murray, and Claire Davis.  The Trojans would score three more points, but the Eagles completed the victory 25-16 in set two with an assist from Warner to Harper Murray.
In set three, the Eagles jumped out to a 9-4 lead highlighted by kills from Kendall Murray, Harper Murray, and an ace and tip from Warner. Skyline would continue to score and extend lead on an ace from Kendall Murray before the Trojans called timeout.  The Eagles were not phased and continued to push ahead to a 16-8 lead.  Sophie Schrag got in on the action herself with a kill pushing the score to 18-9.  Behind the serves of Claire Davis Skyline scored four more points with kills from Akuzue, Davis, and another ace and tip from Warner.  Skyline would go on to win set three with another assist from Warner to Harper Murray.
The Eagles traveled to Perry Michigan on Saturday and won the tournament in two sets over Birch Run 25-13 and 25-23.  The Eagles won every match in two set going undefeated the entire day.  The Eagles travel to Ann Arbor Huron Monday evening at 7:00PM. 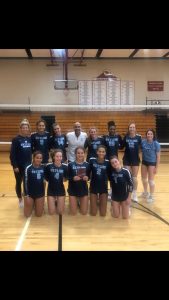