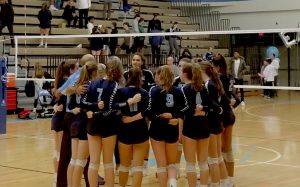 The Skyline Eagles hosted the always tough and competitive Bedford High School on Tuesday, Oct. 15.   The SEC Red Division matchup proved to be one for the ages.  If you are a sports fan you could of compared Tuesday night’s game to either the 1975 Heavy Weight fight between Muhammad Ali and Joe Frazier or Super bowl LI  when the New England Patriots beat the Atlanta Falcons after trailing by as many as 25 points. Bedford has won many of the previous matchups against the Eagles until this year.  The kicking Mules got an idea of Skylines talent at the SEC Jamboree six weeks ago when the Eagles beat them two sets to one.  Knowing what they were up against Bedford came out swinging and determined to walk out of Skyline High School with a victory.

Tuesday evening proved to be a special evening for the Eagles for a couple of reasons. First, the Eagles celebrated a talented group of seniors playing in their last regular season home game.  Megan Brummet, McKenna Pffefer, Greta Schorer, Kendall Murray, and Stacie Warner received a standing ovation from their teammates, friends, and family for their commitment to the Skyline Varsity Volleyball team and program.  Second, the Eagles were locked and loaded to prove their victory over the Bedford Kicking Mules six weeks ago was not a fluke.

The first set proved to be a battle of tips and kills for each point.  The Eagles were ahead 9-8 when Bedford blocked an attempted kill by Kendall Murray and tied the score 9-9.  Bedford scored four consecutive points to increase their lead to 13-9.  Skyline closed the deficit to 13-11 with an ace and kill from Harper Murray.  Bedford was not rattled as they opened the lead again to 16-12.  Skyline answered like a prize fighter, throwing their best punch and tied the score 16-16 with an assist from Stacie Warner to Claire Davis.  Bedford, recognizing a shift in momentum called timeout.  Like Ali and Frazier, trading jabs in the ring, Bedford and Skyline traded points until the game was tied 21-21.  Bedford erred on a serve out of bounds and the Eagles pounced on their first lead of set one at 22-21.  Bedford tied the score 22-22 on a kill from Alyssa Griner.  Skyline would answer with an assist from Warner to Kendall Murray to take a 23-22 lead.  Bedford would answer with a tip to the center of the Eagle defense to tie the game again 23-23.  The Eagles closed the door on the Kicking Mules behind two serves from Kendall Murray.  The first serve was difficult for the Mules to handle and they were called for four touches.  Murray’s second serve was scored as an ace and Skyline won the first set 25-23.

The Eagles started the third set behind 3-0 but they quickly tied the score at 4 points apiece with two assist from Warner to Sophie Schrag, a tip by Warner, and Bedford hitting the ball out of bounds.  The scored remained within one point until Skyline opened a 13-10 lead with assists from Warner to Harper Murray, Davis, and Bedford hitting out of bounds again.  Skyline maintained their 3 point lead at 16-13 on an assist from Warner to Kendall Murray.   Not to be out done Bedford countered with two back to back blocks and took a 21-20 lead.  Coach Cristian called a time out and Skyline answered with two assists from Warner to Harper Murray and the last to Kendall Murray.  Skyline won the third set 25-22.

Skyline opened the fourth set with 1-0 lead, but Bedford answered aggressively with kills from Griner and a tip from Sophia Grey to take a 6-4 lead.  Bedford took a 9-4 lead on three consecutive kills from Griner.  With the score 11-6 Skyline continued to have difficultly staying in sync but kept Bedford from widening the gap on an assist from Warner to Sashsa Akuezue. Skyline closed the gap to 14-10, but Bedford wanting to force a game five opened a huge lead to 21-13.  Knowing his team could steal momentum in the blink of an eye Coach Cristian let his team play on.  The fans on the other hand settled in their seats expecting a game five tie breaker in the coming minutes. The Eagles thought otherwise.  Skyline teammates stood to their feet on the sideline charging their teammates to pull off their biggest comeback of the season.   Behind the serves of Pfeffer, Skyline scored two consecutive points.  Sensing trouble Bedford called timeout with the score 21-15.  Following the timeout Warner assisted Davis and Harper Murray on kills and Pfeffer scored on an ace.  With momentum on the side of Skyline and the score 21-18 Bedford called their last timeout.  Skyline threw more of their best shots at Bedford closing the gap to 21-20.  Bedford scored on a kill and opened the score to 22-20.  Skyline threw some of their best shots and Bedford and took a 23-22 lead on a tip from Harper Murray and an ace from Megan Brummett.  Skyline scored again after Bedford mishandled a pass off the serve of Brummet and Warner assisted Kendall Murray on a kill.  Brummett threw the knockout punch on an ace, outscoring the Kicking 12 -1 in the last 13 points of the set securing a 25-22 victory for the Skyline Eagles.

The Eagles hosted a home tournament Saturday, Oct. 19, before returning to SEC Red division conference play against Saline and beating them in three consecutive sets!