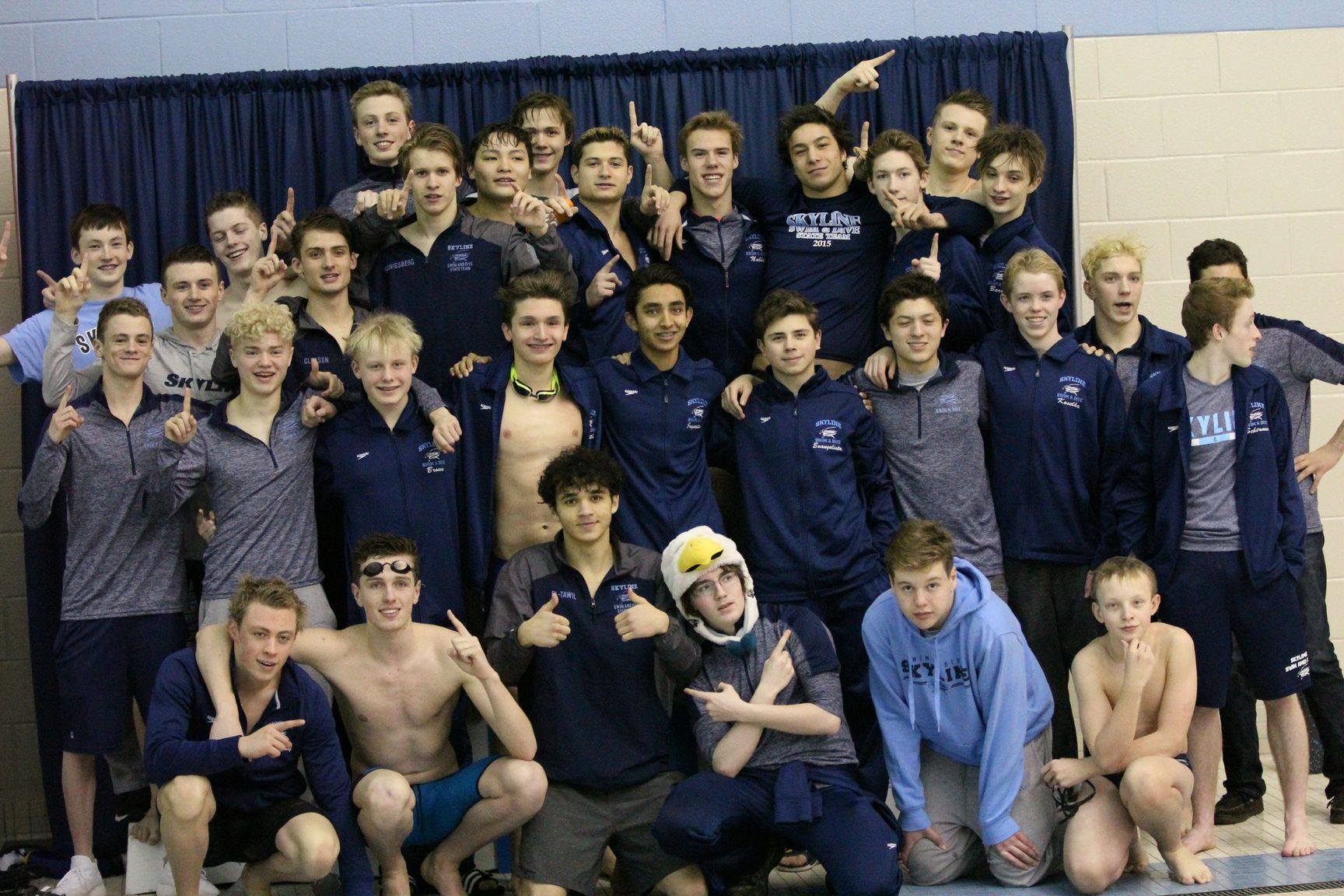 Records feel in the very first event in the SEC Red Championship meet on February 24 at Skyline High School, setting the tone for the Eagles swimmers to win their newest conference title in a big way.

By the end of the 2nd day of the two-day meet, nearly all of Skyline’s swimmers and divers recorded personal best performances. That showed coaches, parents and swimmers how the season wasn’t just about re-writing the record books – a lot of individual achievement went into the season before the Eagles capped the championship meet with a decisive victory.

The Eagles fielded two other relays, with the B relay coming in second in the B final, at 1:39.52, thanks to strong swims by Matteo Procoppe, Kareen El-Tawil, Ben Keith and Wilson Noll. The C relay couldn’t score, but posted a respectable 1:42.97, with swimmers Atticus Dewey, Keegan Gardner, Patrick Dempsey and Russell Noble.

Five Eagles qualified for the second day of sprinting in the 50 freestyle. El-Tawil swam 22.39, finishing 6th, while Noll swam 22.37 in the B final, finishing 10th. Noble rounded out the scorers finishing 16th after swimming 23.59. Non-scorers included Patrick Dempsey and Gardner.

The 2017 state championship diver from Skyline came in first in this year’s conference championship. Henry Schirmer scored 565.50 points, nearly 100 points ahead of his closest competitor after showing prowess on a range of dives that sent some of his individual judge scores well into the 8 range. Teammate Drew Ceely finished 4th, following a season of perfecting his own technique and style on the board.

By the end of the diving portion of the meet, Skyline held a 37-point lead over Pioneer, and led Saline by 59 points – but none of the swimmers were ready to slow down.

The Eagles’ A relay finished 4th in the 200 freestyle event, with MacNeil, Noll, El-Tawil and Jyawook posting a time of 1:28.33. The B relay took first in the B final – or 9th overall – with a time of 1:31.97, thanks to swimmers Mrachko, Noble, Dempsey and Kozma. The C relay finished at 1:38.40, with a lineup of Ryan Hsia, Max Barry, Noah Boucher and Keshav Jogaratnam.

Konigsberg set a varsity record with his 100 backstroke, finishing at 52.12. Dewey tied with Huron swimmer Jonathan Wang for 6th after swimming 55.71. Ethan Procoppe rounded out the Skyline swimmers in the event, finishing with a 1:03.56 time in the C final.

MacGillivray ended the breaststroke race with a varsity, pool and conference record after swimming 55.23, more than 2 seconds ahead of the closets competition. Gardner came in 11th with his swim of 1:02.28, followed by El-Tawil in 12th after his swim of 1:02.37. Partridge swam the C final, dropping 1.75 seconds to come in at 1:03.75.

Skyline was heading to conference victory as the 400 freestyle relay began, and it ended the last race of the event with a new pool record. Tschannen, Jyawook, Cleason and MacGillivray finished at 3:08.67. The B relay came in at 3:17.49, thanks to Matteo Procoppe, MacNeil, Konigsberg and Kozma.